Over the course of the past year or so, we’ve witnessed a slow evolution in Catholic hierarchical thinking on marriage for same-gender couples.  Recently in France and Great Britain, bishops’ groups  have spoken more positively about same-gender couples than they had before.  In Germany and Italy, individual bishops have made positive statements about same-gender couples.  Even here in the U.S., Chicago’s Cardinal Francis George made surprisingly positive statement about love between people of the same gender, even though he opposed Illinois’ marriage bill. 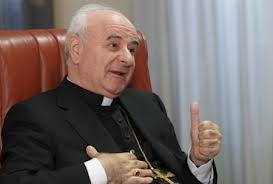 Today, the positive statement on same-gender relationships comes from the Vatican itself.  The National Catholic Reporter stated:

“A high-ranking Vatican official on Monday voiced support for giving unmarried couples some kind of legal protection even as he reaffirmed the Catholic church’s opposition to same-sex marriage.

“Archbishop Vincenzo Paglia, head of the Pontifical Council for the Family, also said the church should do more to protect gays and lesbians from discrimination in countries where homosexuality is illegal.

“In his first Vatican press conference since his appointment as the Catholic church’s “minister” for family, Paglia conceded that there are several kinds of ‘cohabitation forms that do not constitute a family,’ and that their number is growing.

Paglia suggested that nations could find ‘private law solutions’ to help individuals who live in non-matrimonial relations, ‘to prevent injustice and make their life easier.’ “

“Responding to journalists’ questions, Paglia also strongly condemned discrimination against gay people, who he said ‘have the same dignity as all of God’s children’

” ‘In the world there are 20 or 25 countries where homosexuality is a crime,’ he said. ‘I would like the church to fight against all this.’ “

While these positive remarks are welcome, it must also be said that Paglia still strongly opposed marriage equality:

” ‘The church must defend the truth, and the truth is that a marriage is only between a man and a woman,’ he said. Other kinds of ‘affections’ cannot be the foundation for a ‘public structure’ such as marriage.

” ‘We cannot surrender to a sick egalitarianism that abolishes every difference,’ he warned, and run the risk of society becoming a new ‘Babel.’ “

Despite the continued intransigence on marriage equality,  I think it is important to note that the archbishop’s comments represent a giant step forward in terms of Vatican recognition of same-gender couples.  Even just a month ago, when the pope made harsh statements against same-gender relationships in his World Peace Day message, one could not have imagined a Vatican official making such positive comments as Paglia did.  His comments are a small change, but all change happens little by little.