Many of you have probably heard the news that (from New Ways Ministry Blog):

“On the second day of  New Ways Ministry’s Seventh National Symposium, From Water to Wine: Lesbian/Gay Catholics and Relationships in Baltimore, Bishop Geoffrey Robinson of Australia summoned the Catholic Church to rethink its teaching on sexuality- for heterosexuals and lesbian/gay people.  (The full text of his talk can be found on his website.)

‘a new study of everything to do with sexuality’ — a kind of study that he predicted ‘would have a profound influence on church teaching concerning all sexual relationships, both heterosexual and homosexual.’

‘If [church] teaching on homosexual acts is ever to change, the basic teaching governing all sexual acts must change,’ he said. . . .

‘If the starting point [as in current church teaching] is that every single sexual act must be both unitive and procreative, there is no possibility of approval of homosexual acts,’ Robinson said. 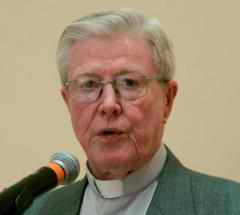 He proceeded, however, to question that natural law argument, especially as laid out by recent popes, and to suggest that a more nuanced reading of divine commandments in scripture and of Jesus’ teaching would lead to a different set of moral norms — starting with a change in church teaching that every sexual act or thought that falls outside a loving conjugal act open to procreation is a mortal sin because it is a direct offense against God himself in his divine plan for human sexuality.

‘For centuries the church has taught that every sexual sin is a mortal sin. The teaching may not be  proclaimed as loudly today as much as before, but it was proclaimed by many popes, it has never been retracted and it has affected countless people’, Robinson said.

‘The teaching fostered a belief in an incredibly angry God,’ he added, ‘for this God would condemn a person to an eternity in hell for a single unrepented moment of deliberate pleasure arising from sexual desire. I simply do not believe in such a God. Indeed, I positively reject such a God.'”

Terrific.
And “Amen”.
This is startling- not only because of its sensibility- but for the courage of a man who has jumped over the traces, so to speak, of his fellow magisterial wizards. Dare we hope that this is the first voice of many?

6 comments on “A Bishop Talks About (gasp) Sex”