of all the darkness past,

upon the surface cast.

Sars hated- okay I won’t say hated even though I said it- he strongly disliked the word “Reverend”.

“It comes from the Latin Reverendus”, he would say in that teaching voice he used-‘he who must be feared,’ not a fitting title for a minister of Jesus Christ. I like the title Father MUCH better. The word ‘father’ speaks of love, not fear.”

And that was Sars. He was loving, he was generous, he was witty, he was smart. He was intensely curious. He collected facts and quotes and songs and stories. He loved a good joke and turn of phrase. He loved being a priest, and he loved “Holy Mass.” He was NOT a housekeeper. I found myself wondering how he’d lived this long with some of his habits… He was protective and opinionated and gracious and probably the pickiest eater I’ve ever had the pleasure to cook for. He loved his family, he loved being Irish. He loved people. And they loved him back. Fiercely. He loved to tell stories and anecdotes about himself and others- and God forbid you get him in front of an audience that encouraged him- he would go on forever, and sometimes, especially in these last few months, he would pay the price for days afterward.

He loved so much. In other words, he was a father.

He was a father to me, adopting me, even though I have a fantastic father and family of my own- he and Vernie adopted them too, as he probably did many of you. He was my hometown pastor, visited me in Europe, wrote a lot of letters, asked my opinion about things, encouraged me, made me feel important. He stuck by me- even when he didn’t agree with me. He stuck by me when others did not. He gave me the keys to his and Vernie’s house, indeed, designating a room to be my own. I talked to him every week and then as his illnesses became more confining, every day. Finally, he took me in when times were hard and God seemed to know we both needed each other.

Like all fathers, he could drive his children crazy. We were about as far across the spectrum from each other politically as two people could be. We differed in our opinions and tastes. We had irritations, inconveniences and miscommunications. He could be stubborn and not want to do what the doctors told him- for one of the smartest men I’ve ever known he could play dumb superbly- like an innocent child, when he didn’t want to do what was recommended. I’m sure I drove him crazy, too.

But for all that, I never once doubted his love and care for me. I hope he never doubted mine.

That’s the love of a father. It’s not always perfect, but it’s always there.

I have a favorite Sars story. He had just moved in with Vernie to the house on N. Western, and the doorbell rang. On the front porch was a man who said, “I’m with the Seventh Day Adventists and I’d like to talk to you about Adventism.”

“I’d love to hear about it,” Sars said. “But first explain something to me. Why are you Seventh Day Adventists so slavish in your obedience to the Pope in Rome?”

“What?” said the man “We are not! I would never follow the Pope!”

“Now wait just a minute,” Sars said. “Not so fast. In 1582 Pope Gregory the thirteenth, with a stroke of his pen, eliminated from the calendar 11 days. Now if you weren’t so fastidious in following the Pope you’d be celebrating the Sabbath on Wednesday and Thursday, not Saturday and Sunday- so you are following the Pope.”

Needless to say, the poor man left rather quickly, very confused. “Poor soul,” Sars always said at the end of the story….

Sars’ favorite passage was John 16.27- “For the Father himself loves you.”

He believed it, he did his best to live it, and he died knowing it.

But more importantly, he made sure as best he could by word and example that we knew it too. 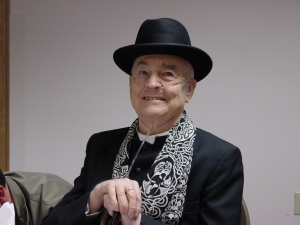 The love of God the Father is seen and felt in the love we all share for this man, Father Sarsfield OSullivan. It is in our stories, our tears, our laughter, and our fumbling attempts at loving.

The love of God is always there.

It’s always here in our hearts.

And so is Father Sars.

Sars’ obituary is up- took me forever to write it, but I think it worked well. You can find it here.

The Montana Standard also did a more in-depth community piece here. Yeah, that’s me in the middle-almost 20 years ago!

As for me, I’m doin’ alright. I’ve slept a bit, have a relatively easy day- my “type A” came out yesterday and got almost everything done, so I’m off for a run, then a haircut and off to Bozeman tonight for Ken and Men’s Group.

Thanks for the prayers and thoughts of support and love. they are deeply appreciated.

The man I’ve spent the last 3+ years caring for died on Saturday morning. What a Sarsfield OSullivan was/is such a great force in my life, and I’m feeling a bit lost without him- and with all of the things I have to do. I’m the personal representative. Who knew that caskets came in so many styles,  sizes and prices, or that people would be jockeying for position in the goings-on to prevent hurt feelings?

Well, okay, I did- but honestly, they can’t expect a guy who’s had three or four hours of sleep to make such important, eternal decisions- but they do.

For better or worse, quite a lot is done. Not nearly enough, though. The grace in all of this is, I have some time to do this and really excellent support- parents, partner, friends- all fantastic.

It’s been a wild week, what with returning from Seattle with Ken, getting a Kindle (LOVE IT- I’ve named her Debbie); dealing with assorted elderly issues with Sars- like nosebleeds from the oxygen hose resulting in another emergency room visit, too weak to get to the toilet on time resulting in the nearly surgical use of gloves, bleach and scrub brushes, etc.; spending more car time to get to the Bozeman Men’s Process Group at Bridger Clinic (Awesome!); and trying to see clients and meditate and exercise and spend some time outside- you get the idea.

Despite all the wonderful and challenging things that have made up my week, I’ve been preoccupied.

My blood tests all came back from Group Health, and my leukocytes and neutrophils (Types of white blood cells) have been climbing steadily since October. We’re not sure that that means- it could be any number of things, so I’m trying not to go there until I have more info. The point is, Ken and I will be going to Spokane on Friday to have more blood drawn to see what can be seen. More car time with my feller- Yay! And more information forthcoming- I hope.

This is the first time that something’s really been unusual in my testing since the HIV diagnosis, and I am trying to be realistic and optimistic and yet… I guess I know that I need to breathe and just  love whatever it is, but for some reason, right now that seems hard. Later today or tomorrow it might not be, but right now-

Anyway, whatever is going on, I’m promising myself to deal with it as gracefully as I can.

I’m counting on you all to hold me to it.

In one of the most courageous, passionate and well-reasoned appeals in modern times, Hans Kung asks the Church to meet the challenges of its current reality with the better angels of its history- namely, with love, humility and collegiality.

Joseph Ratzinger, now Pope Benedict XVI, and I were the youngest theologians at the Second Vatican Council from 1962 to 1965. Now we are the oldest and the only ones still fully active. I have always understood my theological work as a service to the Roman Catholic Church. For this reason, on the occasion of the fifth anniversary of the election of Pope Benedict XVI, I am making this appeal to you in an open letter. In doing so, I am motivated by my profound concern for our church, which now finds itself in the worst credibility crisis since the Reformation. Please excuse the form of an open letter; unfortunately, I have no other way of reaching you.

I really like this one- let me know what you think….

Arrived in Seatown on Thursday after every kind of weather on the way: sunshine, rain, snow, heavy winds, tumbleweeds, hail- I was half expecting locusts at North Bend. Chains required on Snoqualmie and guess who forgot his gloves?

Medical tests done, medicine grabbed, some friends visited, seafood eaten, Trader Joe’s ransacked. Now all I have to do is see some more people that I love today, then back to MT tomorrow. I feel rushed- but I’m doing pretty well at organizing my time- it’s not like I’m going to run out….

Ken’s coming in today- hopefully. He missed the first flight (he’s on standby) and (please God) will get the next one and be here before noon. I miss him, and am looking forward to his meeting a few more of my people and spending all day in the car with him tomorrow. Crazy, you say?