I was asked to be the keynote speaker for the first ever MSU Lavender Graduation- an honor and privilege. This was my introduction (which I loved), followed by the address I gave today.

Fr. Greg Smith, a native Montanan and a licensed mental health counselor has been called the “Gay Godfather of Montana” for his work in advancing LGBTQ rights in the state- especially among faith groups and with spiritual leaders. He has worked for over 25 years in HIV prevention and was an original member of the Montana Governor’s AIDS Advisory Board. Originally a Catholic priest, he now works as an Episcopal priest and therapist in Bozeman where he lives with his husband, Ken and their two dogs, Bandit and Phyllis. 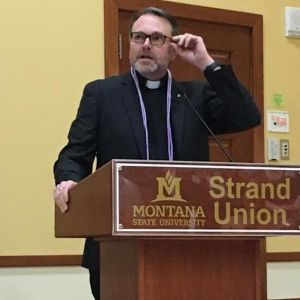 When Ariel told me that the graduating LGBTQ and allied students had chosen me to be the keynote speaker for this celebration, I asked the question that every gay man asks himself in this situation, “What am I going to wear?”

It wasn’t that hard. I decided to wear my clerical collar.

Mostly because we have been subjected to a lot of hateful and ignorant and vicious attacks from people dressed like me. I’m hoping to correct some of that. I’m hoping that you’ll realize that not all Christians hate you. This gay Christian loves you.

It’s weird, but I remember the keynote speaker at my graduation from Twin Bridges High School very clearly because he was SO boring. I think he was an executive at Montana Power. I also remember the speaker when I graduated from Carroll- also because she was VERY boring.

So I vow to you today- I will NOT be boring….

Achieving a degree is an amazing thing in our society. Achieving it when you have extra baggage (placed on you by society) is Extraordinary. Many of you have struggles that I personally know of- and many of you have struggles that I will never imagine. But the great thing about struggling with things- wrestling with things- it makes us stronger. But only if we learn from them- and that also means, sometimes, letting go. It is easy to cling to our pain- that’s called suffering by the way- but it’s much more beneficial to take our pain and use it to change ourselves- make ourselves stronger. More on that in a minute.

When I was a kid growing up in Twin Bridges, Montana, there were very few options for a geeky kid like me. I was too awkward and asthmatic for sports. I was allergic to everything in the summer, which meant I spent a lot of time indoors trying not to mucus myself to death. The one thing I always had were books. Because it was a small town, I had read everything I was interested in at the Library by the time I was in 6th grade. But one thing kept me going, and they arrived every month at McAlear’s drug store. Comic books.

I still love comics- not the lame Archie or Little Lulu, but the superheroes: Superman, Batman, Wonder Woman, Spiderman, Captain America, Thor. They usually involved some lame secret identity that covered up the fact that they were fantastic. I call them lame because they were the people I identified with- and I thought of myself as lame because I couldn’t keep up with the other kids my age- and secret because I, too, had a secret.

I liked boys. A lot. And I knew the world wouldn’t approve. Especially my church. So I maintained this secret identity as Greg Smith, but in my heart, I knew I was really Superman. Someday, when all would be revealed, the kids who teased me and bullied me would learn the truth and cower before my magnificence…. It kept me going. Because sometimes, revealing a secret too soon is an unsafe thing to do- so many of us hold on- even after it really is safe to let go.

So, back to pain. Many of us in this room have experienced pain associated with our sexuality, gender, gender expression or just because we’re unusual. Pain is an important part of our lives- without pain, we might quickly die from an injury of which we are unaware. It’s essential for our survival. The only problem is that many of us live in our past pain- and that keeps us from moving forward. The trick here is to take your pain and make it work for you. Take that pain and use it to jumpstart compassion for others in this world- because that’s what we’re made for. Use that past pain to make a better future for yourselves and others. It’s exactly what your predecessors did- what my predecessors did.

I also need to tell you, as a religious leader, please don’t buy into hatred perpetuated by ignorant religious people.

I need to tell you that however or whatever you believe, God loves you very much. Just the way you are. No matter what Higher Power you believe in.

God loves you very much- just as you are. I believe it, because I feel it. And I feel it because it was ingrained in me from an early age- I see evidence all around me.

So the next time you hear some stupid argument about sexuality or gender from ignorant people, I hope you hear my voice in your head. God loves you- just as you are.

Because you are beautiful.

A few months ago, I had the very difficult task of eulogizing a young trans person at their funeral. It was one of the hardest things I have ever done. Because I know what that pain is like. I know what it’s like to believe that the world will be better off without you.

But as a person of faith I have to tell you outright- that thought is a lie. You were created to be exactly your real selves- the person you are right now.

This world is not better off without you. It needs you. YOU. I believe God made you for a beautiful reason. That’s yours to discover, that’s the adventure of life. It’s yours to create. Believe in your own power.

Because- even if you have to have a secret identity sometimes- you are heroes.

Somewhere deep inside you, you see it. And when you have a hard time seeing it, find those confidants who will remind you. Every Superman needs a Jimmy Olsen, every Batman needs an Alfred. And if you can’t find anyone, call me. I’m happy to remind you.

So, today, as you receive your lavender cords to wear at the official MSU graduation this weekend, know that in my heart I’m officially giving you your capes and golden lassoes and utility belts to go out and change the world.

Please be the heroes our suffering world needs. Be the heroes the next generation needs- and maybe someday somebody will ask you to speak at their graduation!

I believe in you- and so do thousands of others.

The love of justice and mercy
are inseparable.
The God of Justice and the God of Mercy
are one and the same.

And so,
put on your coat and shoes
to meet
the many kinds of people
that God is in love with-
and know
they may not know it yet.

Be kind and gentle
with the radical and jarring news
of a love beyond imagining.

Because this people may not be able
to see or hear or feel
because of their pain,
be gentle-
yet firm-
with the shocking
good news
of this active and radical love.