You may have heard of the 16 year-old student who is fighting to protect other students, after he himself was forced to drop out of high school because of bullying and threats of violence. 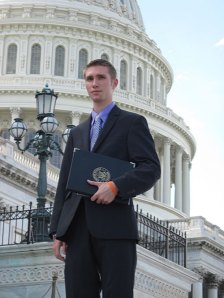 Caleb Laieski, 16, of Surprise, Arizona, started his anti-bullying activism when he was forced to drop out of school when teachers and administration wouldn’t protect him from bullying and threats- even after repeated incidents had occurred. He was being threatened with violence and death threats because he happened to be gay.

Laieski, who has since received his GED, brought the fight to his school district starting with a legal notification that he would bring suit to protect himself and others in the same situation. After the school district agreed to change its policies, he sent a similar notice to every other school district in Arizona, and then went to the Arizona Legislature to fight for laws to protect all students.

He was invited to the White House’s first ever, Conference on Bullying Prevention and is now advocating for the Student Non-Discrimination Act, in Congress and is currently in D.C. “for those who are afraid to speak up.”

Laieski says the bill would “include sexual orientation and gender indentify into the current federal law under education, guaranteeing all students a safe place.” Laieski also pointed out that “when some have opposition to these categories being protected, we must get past that and realize that it’s about giving ever student the right to his/her education a safe place to learn.”

Caleb successfully met with over 30 Congressional Representatives in his first week in D.C., and plans to keep the pace for the remainder of his time in our nation’s capital.

Brave kid.
You’ll get to meet him this week on Same Sex Sunday– I interviewed him today.