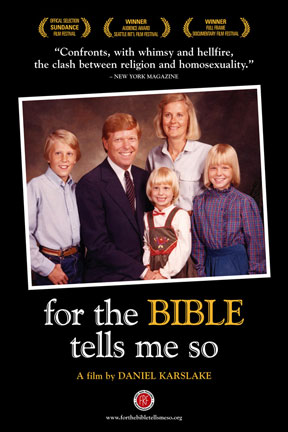 Can the love between two people ever be an abomination? Is the chasm separating gays and lesbians and Christianity too wide to cross? Is the Bible an excuse to hate? We’re going to discuss this after a screening of “For the Bible Tells Me So” Wednesday March 21st 7pm at The Procrastinator Theater in the SUB at MSU- sponsored by BridgerCare. From the movie’s website:

Through the experiences of five very normal, very Christian, very American families — including those of former House Majority Leader Richard Gephardt and Episcopal Bishop Gene Robinson — we discover how insightful people of faith handle the realization of having a gay child. Informed by such respected voices as Bishop Desmond Tutu, Harvard’s Peter Gomes, Orthodox Rabbi Steve Greenberg and Reverend Jimmy Creech, FOR THE BIBLE TELLS ME SO offers healing, clarity and understanding to anyone caught in the crosshairs of scripture and sexual identity.

I’ll be facilitating a discussion which will include persons who have ben involved in ex-gay reparative “therapy”, and members of local Christian communities.

From my friend Ted Hayes:

Greg,  your audience is in for a great time at this movie.  Daniel Karslake, the producer, is a personal friend of about 15 years and a great guy.  We had a showing in 2008 at the State University of New York, New Paltz, with both Dan and Mary Lou Wallner, who is featured in the film, on the scene for that particular weekend.  It literally poured rain that evening but did not dampen the spirits of the more that 200 persons who braved the storm to be in attendance.
The film is wonderful, the stories are wonderful and the people involved with it are wonderful.  Wish I could be there to share in this experience with all my fellow Montanans-in-law (my late partner was from Lewistown).

Hope to see you there!