From Betsy McKay of the Wall Street Journal comes this from the recently concluded International AIDS  Conference in Washington DC:

More than half of the people diagnosed with the HIV virus in the U.S. aren’t getting treatment for their infection, the U.S government said (Friday).

African-Americans and younger people are least likely to be receiving regular treatment, meaning that programs to keep them under a doctor’s care aren’t working or aren’t plentiful enough, according to a report by the Centers for Disease Control and Prevention.

While 81% of those African Americans estimated to be infected are diagnosed, only 29% get ongoing care, and just 21% are “virally suppressed,” or have their virus controlled by a regular regimen of antiretroviral, or ARV, drugs. Among Americans ages 25 to 34, 72% of those infected are diagnosed, but 28% get care and a mere 15% are virally suppressed.

Overall, an estimated 1.1 million Americans are infected with HIV. Only 46% of those who are diagnosed with HIV get regular treatment, while a quarter of all those estimated to be infected are virally suppressed.

“We’ve got to do better,” says Jonathan Mermin, director of the CDC’s division of HIV/AIDS Prevention.

The data were released at the XIX International AIDS Conference in Washington, D.C.

The challenge is to find ways to make HIV testing more widespread, and then make it easier to link those who are diagnosed directly into care — and to make sure they stay there, says Mermin.  “I want to make the healthy choice the easy choice,” he says.

And therein lies the challenge. The easy choice is sometimes pretending the choices don’t even exist….

The Wall Street Journal profiles the statistical rise of same-sex couples in the United States- especially outside of the LGBT mainstream cities like New York, Los Angeles, San Francisco and Washington DC. This increase in same-sex couples is happening  extremely quickly in rural places- including Montana:

The Census Bureau doesn’t ask people about their sexual orientation. But since 1990, respondents have had the option to identify themselves as living with a same-sex partner. This group grew by half nationwide between 2000 and 2010, figures released this week show….The number of self-identified gay couples rose by nearly 90% in Montana, Nevada and West Virginia, for instance, while California, New York and Washington, D.C., saw increases of 40% or less, according to Mr. Gates’s analysis of the data. (emphasis mine)

Yep, looks like we’re here to stay. And there are increasingly more of us- probably due to more of us coming out earlier and feeling less threatened in our hometowns. All good news. 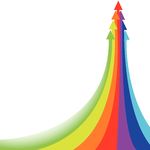 Polls suggest wider acceptance of gays nationwide. About 46% of people oppose gay marriage today, for instance, down from 65% in 1996, according to the Pew Research Center.

Montana native Ken Spencer, 46 years old, said he has seen the shift firsthand. Growing up, he said, he believed that “if you were gay, you had to leave Montana.” He kept his homosexuality a secret for years.

But gay people have become more visible in the state, with this year’s Montana Pride celebration in Bozeman drawing about 2,000 people, up from a few hundred in 2002.

Mr. Spencer said he identified himself as living with his same-sex partner for the first time in 2010. (My emphasis)

Ken and I made a conscious decision to stay in Montana and work for awareness and equality, just as many of you have chosen to do. We were born here, we like it here and we’re not going to be driven out by ignorance and fear. And neither should anyone else.

And, with these statistics, it’s looking like we’re all doing a fairly good job….