I grew up on a ranch in Montana. I rode horses. I branded calves. I collected eggs, brought in lambs, moved irrigation pipe, milked cows, toted hay bales and yes, occasionally, I shot things.

Guns were part of our life- not an enormous part, but they were there. They were a tool-with very serious consequences, and I was taught to be responsible for those consequences. 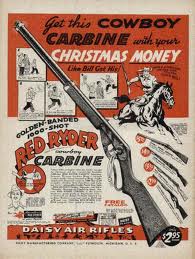 My friends and I, like the kid in A Christmas Story, lusted after the Red Ryder BB gun. When we got them (mine arrived on my 12th birthday- it wasn’t a Red Ryder, but it was a repeater!) we shot at targets- usually tin cans, sometimes at small animals- and, on a dare, the windows of an old barn outside town. On the ranch, we sometimes shot at coyotes and foxes to protect the lambs. My grandfather’s preferred method of livestock protection was a gas-powered “cannon” that would simply shoot off every 20 minutes- a relatively inexpensive (and effective) non-lethal noisemaker.

I, like every other kid my age, went to hunter’s safety classes in preparation for a hunting license and learned rifle use and safety. I went hunting and shot (and field dressed) a few deer in my time, experiencing the blood, the gore, and learning basic anatomy from the inside out. I really went to spend some quality time with my Dad. Just remembering that time outdoors with him brings a smile to my face.

But around age 16, I lost the appetite for it. I just couldn’t rationalize the necessity of shooting a beautiful animal when my survival didn’t (necessarily- it’s a macho thing) depend on it.

I think it started with an increasing awareness of violence in the world.

In 1981, we were worried about the Ayatollah Khomeini, the hostages in Iran, violence and hunger strikes in Northern Ireland, and war in El Salvador. There were assassination attempts on the President and the Pope. The attempt on Anwar Sadat succeeded. We wondered about baseball strikes, air traffic controller strikes, the first woman on the Supreme Court and “gay cancer”.

But most powerfully, I think, was being in Japan that year as an exchange student for the summer. It was watching the solemn commemoration services of the bombing of Hiroshima and Nagasaki that got to me. Sure, we learned about the bombing in school, but they weren’t people to me then- they were savage enemies of democracy, hell-bent on our destruction. They deserved it. And besides, they were far away. What we did to them didn’t necessarily matter.

I couldn’t shake the images I saw in Japan that day of burned, naked, terrified, fleeing human beings. I can still hear the bells ringing in otherwise quiet streets. I can clearly see the sadness on the beautiful faces of people I now knew and loved. I couldn’t reconcile the stunningly beautiful architecture, culture, spirituality and people I now knew firsthand with the “savage enemy” of my social studies and history classes.

I never picked up a gun after I returned from Japan. My Dad and my brother tried to get me to go hunting, but I couldn’t. Nor could I explain to them my suspicion that even the seemingly innocuous act of hunting for me seemed like a slippery slope into barbarism, whether of thinking or of acting. It doesn’t matter. Each one eventually leads to the other anyway.

There’s been a lot of rhetoric happening in the last weeks. Some of it has been noble, some of it savagely self-serving. What I find missing is the soul of the debate- something we seem to be missing every time we talk about this: What’s so important to human beings about protecting and enshrining our ability to kill?

It’s so important that we’ve perverted religion to support it, governments to turn a blind eye, and industry after industry is tied to it- and therefore, the rhetoric goes, is tied the heart and soul of America.

The heart and soul of America is tied to freedom- and that includes the freedom to live a life without the threat of being shot by someone who simply thinks you should be shot. For any number of reasons. Because they have the power. And a gun.

People have lost their minds if they think their right to an AK47 is guaranteed in the constitution. They have gone insane if they believe that they need to have stockpiles of weapons in their homes against the advent of anarchy. They are crazy if they think that every one would be better protected by carrying a gun. But that’s the meme. That’s what all the hullabaloo is about. It’s about guaranteeing our right to kill.

I wonder if any of the people trumpeting unrestricted gun rights have ever seen the consequences of actually using a firearm- the blood, the pain, the terror. And not just the movies or television, but actually having blood on their hands. Actually seeing a dead or dying thing or person in front of them. If so, their voices may be credible. If not, then they need to shut the fuck up.

I also have to say I’m not alone. Look at the transformation of Jim Brady, the clarity of Virginia Tech survivor Colin Goddard to name two others….

I grew up in the West, but it’s no longer the Wild West of Billy the Kid and Matt Dillon, nor is it the friendly, peaceful, sensible West I remember from my childhood. It’s slowly becoming the crazy West of Ted Kaczynski, The Aryan Nations, Columbine, Oklahoma City, the NRA and FOX News.

Back when I was learning to handle a rifle in hunter’s safety class, a kid asked, “When are we going to learn about pistols?” One of the instructors said, “Son, handguns are for police and thugs and shooting vermin. If you want to be a cop, they’ll teach you all you need to know. If you need to shoot a coyote, use a rifle. And if you want to be a thug, you’ll have to learn it somewhere else.”

That’s what I miss- that being a thug used to be a bad thing.

2 comments on “The Right To Kill”