In the Billings Gazette yesterday, the Firegate shitstorm has apparently come up against an election cycle speed bump: bad idea to sue the city and state you represent.

Unfortunately, the lawsuit isn’t being dropped, it’s just being pursued “without monetary compensation”.

The Rehbergs, represented by Billings attorney Cliff Edwards, filed the lawsuit in July 2010, just before the two-year statute of limitations was to run out. At the time, Edwards said the lawsuit was filed to preserve the Rehbergs’ legal claims.

The lawsuit alleges that the Billings Fire Department breached its duty to protect the subdivision during a wildfire that started on July 2, 2008. The fire was quickly contained, but it flared again two days later and spread over a large area, forcing the evacuation of about 40 homes.

The lawsuit sat dormant for months, however, because it was never served on the city. Edwards said the lawsuit was not served because it was hoped that the two sides could resolve the matter outside court. A party filing a civil lawsuit has three years in which to serve the other side.

But negotiations stalled this year, and on Sept. 20 an attorney representing the city, Michele Braukmann, filed an official response in the court case, an unusual legal move she said was intended to “move the litigation forward.”

In the interview, Jan Rehberg said she was frustrated with the city’s refusal to provide information about the fire before the filing of the lawsuit, such as a final report about the suppression efforts.

“When you talk about transparency in government, it goes to all levels,” she said. “They have a lot of responsibility, and in exchange for that they need to be open.”

A day before the city’s response was filed, Edwards sent Braukmann a seven-page letter that included the Rehbergs’ offer to settle the case “without monetary compensation if the city agrees to adopt specific wildland firefighting standards within an agreed time frame, and subject to review and comment by my client and/or the public at large.”

If such policies are already in place, the letter states, the Rehbergs “would like to review those policies and have them amended, as necessary.”

But this is my favorite part (emphasis mine)

On Thursday, Braukmann said the city is “pleased” by the offer to settle the case without a demand for money damages, and the city is working to respond to the request for more information about the fire.

Braukmann said much of the information already has been provided, but the city would provide it again in a different format that might be easier to understand.

‘Nuff said.  Read it all here.

The Laramie Project play originated from a series of interviews conducted by members of the Tectonic Theatre Project following the tragedy of Matthew Shepard which transpired on the outskirts of Laramie, Wyoming. The creators of the play aimed to shed some light on specific faults in society regarding homophobia and hate crimes. If you’re curious about this play, come watch The Laramie Project on one of the previously mentioned dates. Please be aware: the play does contain adult themes and may not be suitable for children or young teens.

Michael Brown interviewed Scott Lively on Brown’s daily radio show “The Line of Fire,” October 19th .  Lively, President ofDefend the Family, is one of the more prominent staunchly anti-gay activists in the world and Brown, founder of Coalition of Conscience, is quickly gaining status in the US for his similar views. Both cite their Christian faith as the source of their passions in combating the “radical gay agenda.”  Both see themselves as God’s instruments in the final stages of this battle to wake up and involve fellow Christians.

Brown repeats often that at 16, he was “radically saved from heroin addiction,” and Lively attributes his immediate deliverance from alcohol and drugs to God.  In their zeal, Brown, Lively and others take the healing gifts and transforming powers of God and apply them to sexual orientation,  expecting gay and trans people to also be radically delivered.  The “if God did it for me, He will do it for you” attitude is Biblical, but not when applied to sexual orientation.

On the show, Lively was recounting the trauma of his weekend in Chicago.  He had gone to a ceremony at Christian Liberty School to receive an award from Americans for the Truth about Homosexuality (AFTAH), hosted by Peter LaBarbera.  The  morning of the event, two brick pavers were thrown through the glass doors of the school with warnings to “shut down Lively and AFTAH.”

When reported, the Chicago Police would not pursue the incident as a hate crime.  Even as I listened to the exchange, I looked up the definition of “hate crime.”  A “hate crime” is “a crime where the perpetrator has a prejudice against the race, color, religion, national origin, ethnicity, sexual orientation, physical or mental disabilities of the target.”  Although Lively, a trained attorney,  decried the event as a “hate crime,” the police registered it as “vandalism.”  Agreed.  This was not a crime against a Christian for his views; this was a criminal reaction against Lively and AFTAH, two groups both solidly anti-gay enough to score positions on the Southern Poverty Law list of “Hate Groups.”

How does a Book with a message of love, grace and equality get so tangled in this “the gays are destroying marriage, families and society” mess?  Clearly, there is danger in taking the tenets of the God-inspired Book of Truth and placing them atop man-biased beliefs of fear.  To Brown, Lively and  about half of the Christian Church, being gay, lesbian, bisexual or transgender is a choice and a sin.  When you overlay a “sinful, chosen behavior” with a few verses in the Bible, taken out of context and mistranslated, it results in the attitudes so clearly expressed between Brown and Lively on “Line of Fire.”

If we, as Christians, fail to understand the natural diversity of God’s creation in sexual orientation and try to impose the expectations that Brown, Lively and others have on an entire class of people, we will join in the fear-based biases, the withholding of equality and the exclusion of non-heterosexual Christians from our faith communities.  Never could I have imagined Jesus and the Apostle John having the exchange I heard on Brown’s radio show.

I have given up on trying to influence either Brown or Lively, both with whom I have had extensive interaction.  But, watching and listening, are well-intended, good Christian people trying to discern the truth in this dialogue.  All one needs do is pay attention to the tone of the message.  Fear, lies, misinformation and discrimination are not Jesus-values.  Use God eyes and ears in truth-seeking; you’ll find it.

It’s turning out to be YouTube Friday… Maybe in light of the remarkable silence by some Christian denominations to participate in the “It Gets Better Campaign”, God makes a (perhaps cynical, certain-to-be-offensive-to-some) point: It Getteth Better.

I think this is actually what some people think…. Thanks, Jeannie!

Over ninety percent of the country’s largest companies state that diversity policies and generous benefits packages are good for their corporate bottom line, according to a new study from UCLA’s Williams Institute.  The study finds that more than half of these companies specifically state that their policies prohibiting LGBT discrimination or extending domestic partner benefits are good for business. The study is based on a review of statements issued by the top 50 Fortune 500 companies and the top 50 federal contractors when they first put these policies in place.

“The specific reasons why these companies felt their LGBT inclusive policies had a positive business impact went  beyond improving their efforts to recruit and retain the most talented employees,” said Brad Sears, Roberta A. Conroy Senior Scholar of Law & Policy and Williams Institute Executive Director.   “Companies linked these policies to improving employee morale and productivity, to meeting the needs of their diverse customers, and to sparking ideas and innovation through employees, including LGBT employees, who bring different perspectives and experiences.”

Beyond business justifications, the study also notes that companies adopt LGBT inclusive policies because they are consistent with their corporate values of fairness and respect and because doing so is simply “the right thing to do.” 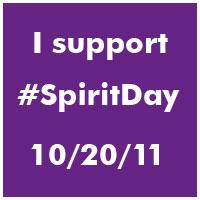 Millions of Americans wear purple on Spirit Day as a sign of support for lesbian, gay, bisexual and transgender (LGBT) youth and to speak out against bullying. Spirit Day was started in 2010 by teenager Brittany McMillan as a response to the young people who had taken their own lives. Observed annually on October 20, individuals, schools, organizations, corporations, media professionals and celebrities wear purple, which symbolizes spirit on the rainbow flag. Getting involved is easy — participants are asked to simply “go purple” on October 20 as we work to create a world in which LGBT teens are celebrated and accepted for who they are.
Haz clic aquí para ver información en español.

Show Your Spirit on October 20, 2011! How you can participate in #SpiritDay: Click Here!