The first event will be held on Tuesday, August 21, 2012,  7:00-9:00 pm, The United Churches of Olympia, 110 – 11th Avenue SE, Olympia, Washington, 98501.  This event is co-sponsored by Call To Action–Western Washington and The United Churches of Olympia.
The second event , sponsored by Call To Action–Western Washington, will be held on Wednesday, August 22, 2012, 7:00-8:30 pm,  St. Mark’s Episcopal Cathedral (Bloedel Hall), 1245 10th Avenue East,  Seattle, Washington 98102.  Washington State Senator Ed Murray, a Catholic will join them at this  event.
Complimentary copies of New Ways Ministry’s book, Marriage Equality: A Positive Catholic Approach, will be available at each 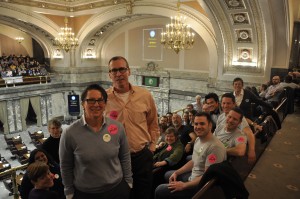 Hundreds of marriage equality supporters, some driving for hours to get to Olympia, filled the Washington State Senate Gallery Wednesday night to witness the critical Senate vote that brings Washington closer to marriage equality. Supporters were not disappointed. The bill passed in the Senate 28-21.

“This is a huge win and historic day for all Washingtonians,” said Kris Hermanns, Pride Foundation’s Executive Director. “This has been a long-time coming and reflects decades of hard work and courageous leadership. Yet, we know that this is just the first step towards recognizing the full equality, humanity, and dignity of LGBTQ people and families in our state. We have much more work in the coming months to ensure that today’s vote creates permanent equality. ”

Though the bill is expected to pass in the House, and Governor Gregoire has committed to signing the bill, opponents of marriage equality – supported heavily by out of state organizations – are expected to collect enough signatures to force an anti-equality initiative for the November ballot that would seek to reverse the Marriage Equality bill.

Your support will be needed to ensure that Washington becomes the 7th state to allow loving and committed same-sex couples can marry. In the coming months, there will be lots of opportunities to get involved.

Right now, you can make sure you and your friends are following Pride Foundation page on Facebook and Twitter. You can sign-up to the Washington United for Marriage Campaign to share your story on why you support marriage equality. You can also join us for Lobby Day on February 16 in Olympia. Lobby Day will be the chance to thank legislators for their ongoing support and to gain further allies for the equality movement. Contact Christina at christina@pridefoundation.org to get involved today.

The Seattle PI’s Joel Connelly has an illustrious history of commentary in Seattle. I’ve enjoyed him for years. But in Monday’s Seattle Post-Intelligencer, he makes one of the best cases for the Catholic Church to give up the paranoid same-sex marriage rhetoric- and his seasoned, well-reasoned thoughts beg to be shared. Excerpt:

The bishops see themselves as shepherds, but American Catholics are not sheep.  They think and act independently.  A recent survey by the Public Religion Research Institute found that nearly three quarters of Catholics favor letting gays and lesbians marry (43 percent) or form civil unions (31 percent).

“Catholics are more supportive of legal recognitions of same-sex relationships than members of any other Christian tradition and Americans overall,” the survey concluded.

The church is also hurting itself:  Its social activism, defense of human dignity and witness to peace should make it a beacon for all who seek justice.  Instead, the church is pilloried as an instrument of reaction.

Its wounds are self inflicted, a classic case of clerical error.  As the National Catholic Reporter put it, editorializing after New York legislators approved marriage equality last spring:

“Even if the bishops had a persuasive case to make and the legislative tools at their disposal, their public conduct in recent years — wholesale excommunications, railing at politicians, denial of honorary degrees and speaking platforms at Catholic institutions, using the Eucharist as a political bludgeon, refusing to entertain any questions or dissenting opinions, and engaging in open warfare with the community’s thinkers as well as those, especially women, who have loyally served the church — has resulted in a kind of episcopal caricature, the common scolds of the religion world, the caustic party of ‘no’.”

Connelly is taking a fair and balanced approach, using the Catholic tradition of social justice and charity to argue for the reality of human experience- in this case the reality of same-sex relationships. The very reality of them flies in the face of the “Natural Law‘ argument:

“Jesus befriended those who were marginalized because He knew it was only in the security of loving, unconditional relationships that hearts and lives are healed,” argues writer Justin Cannon, reflecting the Christian faith as taught to us by Matthew, Mark, Luke and John.

Not only healed, but enriched.  I’ve witnessed a warm, very traditional moment over the years.  A goofy, dreamy smile crosses the face of a friend, who after years of playing the field announces  “Well, I met this woman (or guy)!”  It signals a readiness to settle down.  My natural reaction is to say,   “You lucky dog!” and to be there, in affection and support, when the knot is tied.

Life together is a natural passage in life.  Yet, according to “natural law” the Catholic church frowns on my friends who fall in love with somebody of their own gender.  It violates nature, according to a U.S. Conference of Catholic Bishops statement, because such “inherently non-procreative” relationships “cannot be given the status of marriage.”

The church’s positions are, as state Sen. Ed Murray put it Friday night, “hurtful” as well as contradictory.

Out of one side of its mouth, the church condemns “all forms of unjust discrimination, harrassment and abuse” against gays and lesbians. At the same time, the Cathechism of the Catholic Church describes “deep-seated homosexual tendencies” as “objectively disordered.”

As my critical thinking professor at Carroll College taught me, the Church’s argument is flawed. It can’t have it both ways. It either acknowledges the reality of same-sex relationships- the reality of the complexity  of human love as a gift from God- or it becomes the ubiquitous symbol of fantasy, its credibility falling off the edge of its own absurdly flattened earth.

Error: Twitter did not respond. Please wait a few minutes and refresh this page.