I often wonder at the culture of particular institutions-what makes them tick? Every institution has a culture, a dominant mindset that shapes thinking and behavior and performance. It’s a natural part of institutional existence.

It’s also often carefully controlled and managed. And I am the sort of curious human that loves to know what things are like on the inside- because they’re often very different from what we’re meant to see- thus my fascination with secret societies like Scientology.

But as a therapist, I’m interested in the integrity of a person or institution. Do they have to hide what they truly are in order to get what they want? Do they have to resort to subterfuge and game-playing in order to succeed? Is what they do in the dark shameful in the light? Healthy people, institutions and relationships work toward integrity and away from shameful and deceitful behavior. Health is about honesty.

So enter my fascination with Fox News. I honestly find the rhetoric maddening and simplistic and self-serving- but I still want to know: What’s it really like behind the scenes? Are they serving the Kool-Aid all day long?

The Guardian’s Tim Dickinson gives us some insight:

At the Fox News Chrismas party the year the network overtook arch-rival CNN in the cable ratings, tipsy employees were herded down to the basement of a midtown bar in New York. As they gathered around a television mounted high on the wall, an image flashed to life, glowing bright in the darkened tavern: the MSNBC logo. A chorus of boos erupted among the Fox faithful. The CNN logo followed, and the catcalls multiplied. Then a third slide appeared, with a telling twist. In place of the logo for Fox News was a beneficent visage: the face of the network’s founder. The man known to his fiercest loyalists simply as “the Chairman” – Roger Ailes.

“It was as though we were looking at Mao,” recalls Charlie Reina, a former Fox News producer. The Foxistas went wild. They let the dogs out. Woof! Woof! Woof! Even those who disliked the way Ailes runs his network joined in the display of fealty, given the culture of intimidation at Fox News. “It’s like the Soviet Union or China: People are always looking over their shoulders,” says a former executive with the network’s parent, News Corp. “There are people who turn people in.”

It ain’t pretty, people, but it’s impossible to not read this article. So read the whole, fascinating story here. And pass it around. 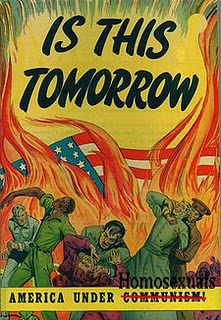 Guest Post
By Brody Levesque (Washington DC) FEB 1 |
I am so angry. I am angry because I am tired of the relentless attacks by alleged Christians, who profess to belief and follow the precepts of their collective idealogical/theological standards as spelled out in the tenets of their “holy” book. They do not.
What I see, is yet another form of McCarthyism cloaked in pseudo religious form, being used to demonize, victimise, and ostracise the gay men, women, transgendered,bisexual, persons, who, according to their narrow interpretative beliefs and practise of Christianity are inherently evil.
Today, again, were two absolutely stunning examples displaying nothing but naked hatred for LGBTQ human beings. First from the Southern Poverty Law Centre’s listed hate group Family Research Council’s Peter Spriggs, an editorial in this morning’s Baltimore Sun newspaper railing against marriage equality in Maryland. This was followed by this afternoon’s vote by the Iowa House of Representatives on a proposed Iowan constitutional amendment to not only just ban same-sex marriage, but also nullify marriages that have already taken place in that state since equality rights were granted.
Here is an except from the editorial by FRC’s Spriggs:

And while some homosexual couples do raise children (most of whom were conceived in previous heterosexual relationships), such arrangements by definition deprive a child of his or her birthright to be raised by both a biological mother and father. Maryland may choose to tolerate and even protect such unconventional childrearing by allowing adoption by homosexual partners or couples. But it has no obligation to actively affirm and celebrate (through ‘marriage’) the deliberate creation of permanently motherless or fatherless families.”

This bigot’s equating a civil marriage license to bearing children is fallacious. The divorce rate in the US is 54%. Every divorce in a marriage with children deprives a child of a full-time mother and father. The out-of-wedlock birthrate in the US is 40%. If Mr. Spriggs is so concerned about the children, why is he not working to make divorce more difficult, and removing children from single-parent households? The truth is, the divorce of 54% of American marriages does much more harm than the <3% of the population who are gay (and probably less than half of those want to get married and half of those that marry would want kids–so that’s less than 1% of the population.)
Marriage is about the uniting of two lives together. The state has no requirement and no expectations that a married couple will have children. A childless marriage is as valid in the eyes of the state as a marriage with 12 children. Couples who can’t have, or don’t want children don’t view their marriages as ‘fake’. People get married because they meet someone they want to spend the rest of their lives with. A person who divorces his/her spouse because the spouse is infertile would be seen as an arse.
Many people who grew up in abusive homes would attest that the simple fact of having a ‘natural’ mother and father present does not guarantee that a child will be loved and nurtured.

These are the same arguments that have been trotted out by the proponents of Proposition 8. It fails to account for centuries of family law that accord rights and responsibilities to siblings, grandparents, adopted parents, and many many many other people who have nothing to do with the actual procreation of the child, and, yes, even to same-sex parents of children. And if marriage were purely for procreation, why would childless couples allowed to married, or at least why a marriage certificate isn’t merely a “learner’s permit”, and no rights or responsibilities conferred until a child is produced?And also failing is to show how any mechanism barring same sex couples from marrying achieves this goal.

Is he really proposing that if homosexual couples were allowed to marry, that it heterosexuals would somehow fail to produce children? It’s akin to say that by allowing interracial couples to marry, that that would somehow hurt white couples? There is no mechanism which would cause either, and both are just grounded in irrational discrimination.

“The Constitution is meant to protect the freedoms and liberties of all Iowans,” she said after the bill passed. “It is inappropriate to use the political process to single out and deny a group of Iowans of their constitutional protections.” ~ Carolyn Jenison, Executive Director of the LGBT-rights group One Iowa.
Let’s leave the Maryland situation and Sprigg’s bull-feces for a moment and look at Iowa where a constitutional ban on gay marriage, civil unions and domestic partnerships passed the Iowa House this afternoon in a 62-37 vote. Three democrats joined 59 Republicans in support of the measure. Thirty-seven Democrats voted “no,” and one Republican was absent.
The Iowa Independent reports:

After discussing his belief that marriage is about “responsible procreation,” state Rep. Rich Anderson (R-Clarinda) asked what could come next if the 2009 Iowa Supreme Court decision that legalized same-sex marriage is allowed to stand. He concluded that it would lead to legalized polygamy and incest.

I could also cite the example of Dean Cannon, the speaker of the Florida House of Representatives, who wants to return the ban on adoption by Gay & Lesbian couples.
Cannon discussed his views in an interview with the Florida Baptist Witness news outlet, where he said that the Republican-controlled legislature would be prepared to attempt to resurrect the adoption ban depending on how the issue plays out in more court districts or the administration of Governor Rick Scott.

“Until we know how the governor and DCF secretary are going to apply it, it’s not a foregone conclusion that the Legislature should step in,” said Cannon. “If we think we should, we’re certainly prepared and willing to do so.”

Plus, add in the battles in New Hampshire, New York, Rhode Island, California and apparently also the District of Columbia as now a GOP lawmaker on the House committee that oversees matters pertaining to Washington wants to revisit the city’s same-sex marriage law.
Then there is the bullying in schools all over the United States specifically aimed at kids who are either Gay or “perceived” to be Gay.
What we have now is McCarthyism in its latest manifestation and without a doubt, even more ugly. This is state sanctioned persecutions of human beings based on beliefs that ought to be held separate from governmental operations and practise but aren’t due to the overwhelming need by a very small minority that are in a state of absolute lust  to be set in power over the majority.

McCarthyism n. The practice of publicizing accusations of political disloyalty or subversion with insufficient regard to evidence.

In this case, the political being augmented by alleged theological disloyalty because after-all, homosexuality is a sin right?
What part of the U. S. IS NOT a Christian nation do these morons not get? I was speaking to a friend and whose principle work is as an LGBTQ activist in Utah. Brave fellow that eh? Utah is ground zero and he said and I believe him, until we find a practical way to counter the Mormons and their money, looking at the National Organization for Marriage as an example, and find a unified voice, then this form of McCarthyism will continue to roll over all of the equality rights of the LGBTQ people, not just the marriage ones either.

Harvey Milk once said that Gay people need to come out. Why? Simply because this is how the perceptions of evil and sick and any other twisted definition the Reich-wing comes up with targeting gays, lesbians, bis, trans, persons can be stripped away and exposed for the outright bigotry and lies they are. When people can relate to one another as human beings and not some form of vague ideological vitriol, then the humanity shines not the bigotry.

We need to target Mom, Pop, Apple pie, and Chevrolet driving folk because they are the ones we need to accept us, as ourselves…fellow human beings.
But, until the LGBTQ community gets its act together, gets its message across to those who really need to hear it and not the Christianazis like Spriggs, or those GOP extremists, or NOM, then we all will continue to lose and this nasty McCarthyism will continue to reign unchecked.

I’m with Wulfgar! This response by Keith Olbermann to Ted Koppel’s editorial in the Washington Post needs to be seen by as many people as possible: