In a surprising (or maybe not) press release yesterday, The Susan G Komen Foundation announced it is cutting off funding to the breast cancer screenings and education programs run by Planned Parenthood. The New York Times:

The move will halt financing to 19 of Planned Parenthood’s 83 affiliates, which received nearly $700,000 from the Komen foundation last year and have been receiving similar grants since at least 2005.

Planned Parenthood contends that the Komen foundation is yielding to longstanding pressure from anti-abortion groups, which Komen denies.

A spokeswoman for the Komen foundation, Leslie Aun, told The Associated Press that the main factor in the decision was a new rule adopted by Komen that prohibits grants to organizations being investigated by local, state or federal authorities. Ms. Aun told The A.P. that Planned Parenthood was therefore disqualified from financing because of an inquiry being conducted by Representative Cliff Stearns, Republican of Florida, who is looking at how Planned Parenthood spends and reports its money.

After the A.P. article was posted on Tuesday afternoon, the Komen foundation declined to make Ms. Aun or another staff member available to discuss the Planned Parenthood decision. The foundation issued a statement saying it was seeking to “strengthen our grants program” and had “implemented more stringent eligibility and performance criteria.”

The statement added, “While it is regrettable when changes in priorities and policies affect any of our grantees, such as a longstanding partner like Planned Parenthood, we must continue to evolve to best meet the needs of the women we serve and most fully advance our mission.”

Cecile Richards, the president of Planned Parenthood, said that the decision “came so abruptly in the face of a long, good, working relationship with Komen” and that the change in financing criteria “was written specifically to address the political pressure that they’ve been under.”

Planned Parenthood’s press release on the action stated that

Led by a generous $250,000 gift from Amy and Lee Fikes’ foundation, Planned Parenthood has established a Breast Health Emergency Fund to provide immediate funding to ensure that Planned Parenthood health centers can continue to provide breast cancer screenings and care that had previously been supported by Komen.

Amy and Lee Fikes said: “Our family is saddened that the far right has relentlessly and successfully pressured the Susan G. Komen for the Cure Foundation to cut funding for breast screening, referral, and education support to low-income women who, until now, have been able to depend on the partnership between Komen and Planned Parenthood for their health. In response to this disappointing news, our family foundation has granted $250,000 to establish a Breast Health Fund at Planned Parenthood, so that their health centers across the country can continue to put the real needs of women ahead of right wing ideology. We encourage others to join us in replacing the funds lost, so that no woman’s health is imperiled by Komen’s unfortunate decision.”

Some have seen a connection between the hiring of Karen Handel, a Georgia gubernatorial candidate who ran on an aggressively anti-abortion platform and the cut of funding to Planned Parenthood- which also provides abortions at some of its sites. Laura Bassett writes that

Handel wrote in her campaign blog that she “do[es] not support the mission of Planned Parenthood.”

“During my time as Chairman of Fulton County, there were federal and state pass-through grants that were awarded to Planned Parenthood for breast and cervical cancer screening, as well as a ‘Healthy Babies Initiative,'” Handel wrote. “Since grants like these are from the state I’ll eliminate them as your next Governor.” She also wrote that she opposes stem cell research and supports crisis pregnancy centers, which are unregulated, Christian-run operations whose main mission is to convince pregnant women not to have abortions.

After Handel lost the gubernatorial primary, Susan G. Komen for the Cure named her to be its senior vice president in April 2011.

Komen’s Race For The Cure has become one of the most successful fundraising events in the U.S., with races in virtually every market. On the blogosphere and Twitter, there is chatter about boycotts, protests and closer scrutiny of Komen’s funds. We’ll see if it has any teeth. 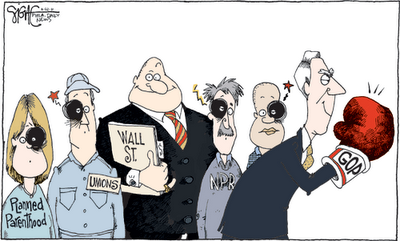 They are critical of Peterson’s fairness in scheduling and running hearings, his limiting the ability of people to testify or at least state their names, and his failing to stop representatives or witnesses from making inflammatory comments such as calling abortion providers murderers and homosexuality an abomination.

For his part, Peterson, serving his fourth term in the Montana House of Representatives, defended how he runs the committee and dismissed the criticisms.

“I would say they’re absolutely wrong,” he said. “I try to be fair to everybody. That’s my goal. I’m an attorney. I know it’s very important that all parties be treated the same.”

Johnson’s article continues with numerous complaints of unfair treatment from Planned Parenthood,  Civil Liberties Union of Montana and the Montana Human Rights Network- all known organizations that Republicans fear and despise. The shenanigans on display by the Judiciary leadership provides an opportunity for Republicans to use code words to invoke a familiar response to their followers, making over  these human rights groups into bogeymen, conjuring up terror in the hearts of the ignorant and easily led. More:

“The chair is shutting down public comment, he’s shutting down hearings on bills that are life-and-death situations for Montanans,” (Stacy) Anderson (of Planned Parenthood of Montana) said, adding, “I think the civility has degraded, and I think some of the questions to people are degrading.”

…One committee member, Rep. Diane Sands, D-Missoula, said she believes Peterson violated House rules by not allowing people to come to the podium and at least state their name and their positions on four bills. She said she couldn’t recall this happening before, but figured out a way around it by reading to the committee the names on the sign-in sheet and having people stand as she called their names.

“It only takes a few minutes for people to stand and say their name,” Sands said. By not allowing people that courtesy, she said, “it shows disrespect to those people and to the legislative process.”

Diane Sands- a giant in Montana human rights as far as I’m concerned, is a shrewd and yet firmly convicted politician who has served this state- well beyond her constituency-with passion, distinction and strength. She’s well worth listening to. And Johnson’s article is worth reading in its entirety.

And Carol Williams, D-Missoula’s response for those of you who haven’t seen it: