Last week (while I was on vacation)- NASTAD released the ADAP waiting list. From NAPWA (emphasis mine):

There’s some good news on the ADAP front: the FY 2011 emergency federal ADAP funding has brought waiting list numbers down in a number of states. South Carolina has eliminated its waiting list altogether, for the time being.

The bad news is that the numbers aren’t coming down very much. Georgia and Virginia – big states with big budgets – account for almost two-thirds of the nation’s total waiting list, and it looks like they are accepting their waiting lists as the “new normal.” Other states have disguised their real unmet need by setting income eligibility ceilings artificially low, and that looks set to become the “new normal,” too.

It’s hard to understand and hard to forgive. Over five years, it will cost the states with visible waiting lists or waiting lists whisked away by lowering income ceilings more to care for PLWHA who become sick enough for Medicaid than it would have cost to give them drugs to keep them healthy. It’s already a dollars-and-cents blunder before we even think about the human cost.

Here are the latest numbers from our friends at NASTAD: 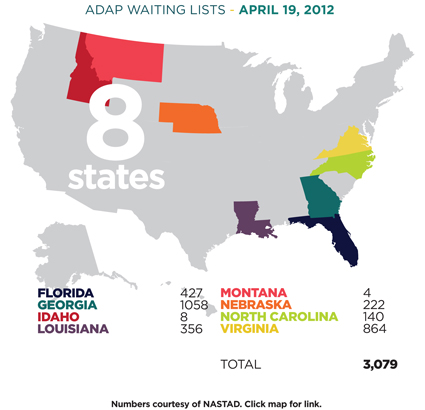