It’s the first anniversary of official integration of openly gay, lesbian and bisexual people in the military. I can think of no better way to observe it than by the words of Joint Chiefs Chairman Mike Mullen as he testified before Congress last year:

“No matter how I look at the issue, I cannot escape being troubled by the fact that we have in place a policy which forces young men and women to lie about who they are in order to defend their fellow citizens. For me, it comes down to integrity – theirs as individuals and ours as an institution.”

What many don’t understand is that lies create shame- and shame creates pain. For many LGBT people, lying on a daily basis is dehumanizing and debilitating over the long term, destroying integrity, creating depression, increasing anxiety and lowering significantly a person’s quality of life.

On the other hand, telling the truth and being accepted can greatly minimize depression, anxiety and shame, increasing quality of life significantly.

I think the military’s embracing of honesty sends an important message to Americans- one that should have been sent from the beginning:  lying is bad. In fact, it’s bad policy.

And here’s to the many members of the military who survived- who “served in silence” before truth was finally policy (including my husband). Thank you for your service.

In fact, maybe today should be Gay Veteran’s Day…. 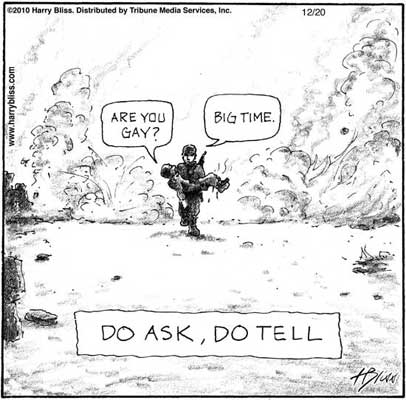