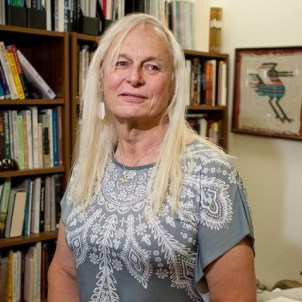 Cassidy Medicine Horse is a Pride Foundation supporter and founder of TransMSU, a new group at Montana State University in Bozeman.
**Photo courtesy of the Bozeman Chronicle

Being trans can be a challenge anywhere, but it’s especially tough in Montana, as there are no statewide nondiscrimination protections for gender identity, including at Montana State University. A coalition of student organizations is working to change this, including TransMSU (TMSU) a support group for transgender MSU students.

Founded by graduate student Cassidy Medicine Horse, the group came into being after Medicine Horse was invited to talk about barriers to the community to the MSU student senate.

Despite Bozeman’s reputation for being a fairly liberal college town, Cassidy explains that prejudices exist when it comes to bathrooms, showers, dorms, and health care providers. Even though the school is receptive to hormone therapy coverage, it’s common for insurance carriers to exclude it from their prescription formulary. Cassidy adds that, to her knowledge, there are only three therapists and as many doctors in the Bozeman area who treat trans individuals.

Navigating these barriers while also going through a major life and identity transition was extremely difficult for Medicine Horse, and she started TransMSU to ensure other transitioning would have a built-in support network.

“Transitioning can be, at the very least, a lonely time,” she says. “Sometimes it can be filled with self-recrimination, self-loathing, anger, and great loss of family and friends.”

Beyond support, Medicine Horse hopes the group will provide a place for trans advocacy and increased visibility of the community, as they have with the efforts to add gender identity and expression to the Montana University System bylaws.

“What I am truly hoping for is that trans as a paradigm of the ‘other’ will cease to exist,” she says. “Sometimes I joke, half-heartedly, that I don’t want people just to come out of the closet. I want them to burn the closet down. The fact that a person is transgendered or transsexual should be about as interesting as whether you had mustard on your last sandwich. To be transgendered is not about sex. It is not about being homosexual or straight. It is about identity.”

Until then, she and TransMSU are partnering with the Montana Human Rights Network, a longtime Pride Foundation grantee, to work for equal protections for all Bozeman residents.

“Bozeman is a great little town with great folks,” adds Medicine Horse. “It’s time that we stand next to Missoula and Helena and give an additional voice to the concept of equality.”

When asked how people can be better allies to trans people, she shared:

*A cisgender person is someone who identifies as the gender/sex they were assigned at birth.  The colloquial use of cisgender suggests that it is the opposite of transgender.

Earlier, Bobbie posted an update about the Helena Non-Discrimination Ordinance. And, in my first post on this blog, I’m going to strongly disagree with her on the preferred outcome related to the locker room amendment.

Bobbie believes that through compromise, this amendment could be modified to an acceptable level. I think this amendment is a dealbreaker and if it remains, is reason enough to oppose the ordinance as a whole.

Now, I want to throw a caveat into this assertion, and a little bit of wiggle room for me to admit that I might be wrong on this: I’m not a transgendered person; I will never assert that I know all of the experiences that a person goes through when dealing with the societal bias and stigma that transgendered people deal with on a daily basis.

That being said, I have a difficult time accepting an ordinance that could put any trans people in a more difficult position. Under her compromise position, Bobbie suggested,:

While I understand the sentiment that Bobbie is expressing, I don’t think this gets to the fundamental issue at hand. Currently, trans men and women often face a dilemma when deciding which locker room or restroom to use. This ordinance was introduced in order to make these sensitive situations more safe for all Helenans. I worry that this compromise amendment could leave some of our trans brothers and sisters behind.

Furthermore, there currently is no prohibition on trans people using their self-identified restroom or locker room. I worry that this amendment would codify a law which would leave some trans people in a worse position than when this debate started more than a year ago.

I want to restate though, I am not a trans person, so I’m not going to claim to understand the experiences they’ve been through. But, as a cisgendered homosexual person, I can’t handle the thought of knowing that my rights are being advanced, while the rights of others are being restricted in city code. That’s why, this amendment is a deal-breaker no matter your gender identity.

I hope that Commissioner Haque-Hausrath and Mayor Smith continue to oppose this amendment, and Commission Thweat changes his opinion on this measure.

Today is the Transgender Day of Remembrance.

The Transgender Day Of Remembrance (TDOR) was created to bring awareness to the many transgendered persons who have been killed for being faithful to their inner selves.

I invite you today to take a moment to understand. Read this short and yet comprehensive work “Understanding Transgender” from the National Center For Transgender Equality.

And if you really want to delve into what it’s like to be transgender, read Bobbie Zenker’s book, TransMontana.

On May 5th, the American Psychiatric Association (APA) released a second round of proposed diagnostic criteria for the 5th Edition of The Diagnostic and Statistical Manual of Mental Disorders (DSM-5). These include two diagnostic categories that impact the trans communities, Gender Dysphoria (formerly Gender Identity Disorder, or GID) and Transvestic Disorder (Formerly Transvestic Fetishism). While GID has received a great deal of attention in the press and from GLBTQ advocates, the second Transvestic category is too often overlooked. This is unfortunate, because the Transvestic Disorder diagnosis is designed to punish social and sexual gender nonconformity and enforce binary stereotypes of assigned birth sex. It plays no role in enabling access to medical transition care, for those who need it, and is frequently cited when care is denied (Winters 2010). I urge all trans community members, friends, care providers and allies to call for the removal of this punitive and scientifically unfounded diagnosis from the DSM-5. The current period for public comment to the APA ends June 15.

Like its predecessor, Transvestic Fetishism, in the current DSM, Transvestic Disorder is authored by Dr. Ray Blanchard, of the Toronto Centre for Addiction and Mental Health (CAMH, formerly known as the Clarke Institute). Blanchard has drawn outrage from the transcommunity for his defamatory theory of autogynephilia, asserting that all transsexual women who are not exclusively attracted to males are motivated to transition by self-obsessed sexual fetishism (Winters 2008A). He is canonizing this harmful stereotype of transsexual women in the DSM-5 by adding an autogynephilia specifier to the Transvestic Fetishism diagnosis (APA 2011) . Worse yet, Blanchard has broadly expanded the diagnosis to implicate gender nonconforming people of all sexes and all sexual orientations, even inventing an autoandrophilia specifier to smear transsexual men. Most recently, he has added an “In Remission” specifier to preclude the possibility of exit from diagnosis. Like a roach motel, there may be no way out of the Transvestic Disorder diagnosis, once ensnared.

What You Can Do Now